The Athletics had nothing to play for last night but ended up playing spoiler to the Angels with Trevor Cahill and the A’s bullpen combining to shutout an Angel offense that looks like it might be past its expiration date.

Perhaps the Angel hitters were merely confused by the idea that a rookie pitcher is actually capable of pitching well after watching their own rookie hurlers struggle for so long.  Whatever the cause, the Angel bats have gone into a tailspin of late, having scored just 31 runs over the last eight games, which just so happens to coincide with the Angels’ slump.

The inability of the Angels to score tonight not only spoiled the Angels’ own fortunes, but also spoiled a perfectly good start from Ervin Santana which is a real shame considering how few and far between quality starts have been from Santana and the Angel rotation in general of late.  Nobody expects the hitters to stay hot all season long, but they need to pick it up in a hurry before the Angels’ lead over the Rangers evaporates altogether.

One bad pitch was Oakland needed to spoil a perfectly good start by Ervin Santana. 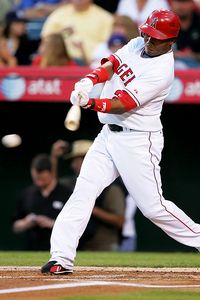 This is somewhat unfair to single anyone out, but Aybar’s night was symptomatic of the Angels’ overall offensive struggles.  Erick saw just seven pitches in his three plate appearances on a night where the newfound Angel patience took the night off.  Like the rest of the squad, Aybar was overly aggressive on Cahill’s sinking fastball and kept trying to pull him even though it was resulting only a cavalcade of groundball outs.