When it comes to solving the Angels’ quest for starting pitching help, I am pretty close to raising the white flag.  The trade market has been scoured and picked through and the free agency pool has run drier than a Death Valley swimming pool.  Unless Brad Penny decides that he wants to continue to get beat up in the American League rather than seek asylum in the pitcher-friendly National League, the Angels have almost no chance of adding a veteran arm to the staff.  Still, the Angels have an open 40-man roster spot and less than four days to fill and still have the player be post-season eligible.  That is going to take some real creative maneuvering from the Angel front office, but I think I might be able to help them with a few off the wall ideas that are so crazy that they might just work: 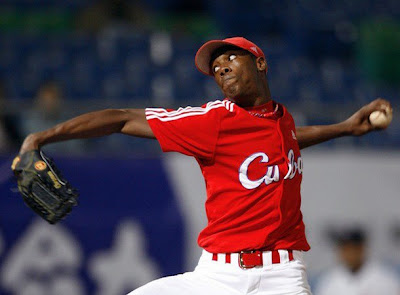 What do you mean Brad Knox isn’t Cuban? Somebody get that android a uniform!